Cage: any vehicle that is not a motorcycle, but particularly an automobile.

Track: This is the portion of a lane in which a rider maintains their position in a group. A lane of traffic is split into five zones: the left track is the second zone from the left, the middle of the lane (generally not used) is the third zone, and the right track is the fourth zone from the left. Two zones on the sides of a lane serve as margins. A rider may vary his path of travel from his normal track as is required by a road hazard or by an incursion into the group’s lane by other vehicles. When departing from a stop, the rider in the left track normally pulls out before the rider on the right, returning to a staggered formation. 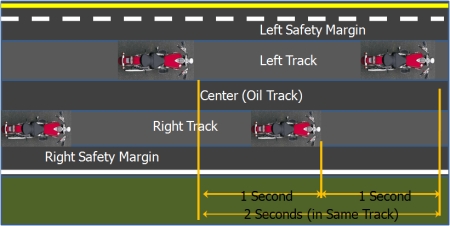 Oops, you forgot something.

The words you entered did not match the given text. Please try again.

Reply Wayne Vick
9:16 PM on April 15, 2011
Groups ride in a staggered formation to reduce the impact on the motoring public of a large group stretching out. It also helps us maintain the integrity of the group to keep automobiles from breaking into the group. Given that however, if an automobile wants to break into the group, let them! You are no match for a 2 to 10 ton adversary that feels a need to take this exit.

While in a staggered formation every rider in the group must ride to their comfort level. The lane you are in is fully yours. Use it as you must to remain safe. That means if you feel you need to move from the right track to the left then please, safely do so. Recognize however, that the riders behind you will have to adjust to your movements. If a rider repeatedly leaves their track then open your following distance a little for your own safety. Oh, if you don't maintain your following distance and track understand that you are going to annoy the people behind you. So annoy them if you must, the most important consideration is for everyone to be safe and comfortable on our rides..

The time for planning on who goes where in a formation is before we set out on a ride. The Ride Captain will direct riders where they will ride in the formation. Newbees or less experienced riders, or experienced riders with a new bike (less than 6 months) should be in the left or inside track. Don't press them on their formation integrity (track maintenance and following distance) while they are riding. However, everyone, please be consistent with how you ride while in formation so that others can adjust to you and not have to keep adjusting to your inconsistency, ruining their ride enjoyment.. As we are forming up tell those in the adjacent and following tracks that you may use the whole lane or increase your riding distance. That way they will expect it.

Start a Free Blog at Webs.com